As Pride month continues, I was drawn to trans Pinay artist and activist, Ram, whose ethereal photographs echo Romantic paintings but defy traditional cisgender Eurocentric standards of femininity. From her poses that echo J.W. Waterhouse and John Everett Millais’ Ophelia, it was Ram’s various La Grande Odalisque poses that I was particularly drawn to. 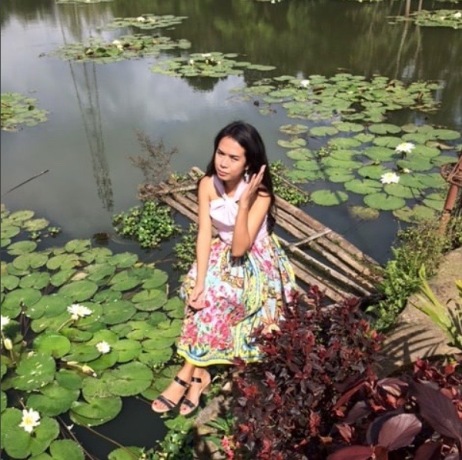 Jean Auguste Dominique Ingres’ La Grande Odalisque attracted wide criticism at the time for elongating the female form to unrealistic anatomical proportions in order to idealize the female body as more sinuous and elegant. Contrast Ram as subject in her own Odalisque representations which provide commentary on society’s limited definition of femininity that oftentimes fails to be intersectional and inclusive of trans women. Ram sets herself against a backdrop of the tropics and lies reclined as a beautiful brown trans woman with the same seductive Ingres gaze, but challenges traditional notions of cisgender Eurocentric feminine beauty and femininity itself.

As Ingres painted the female body as he wished it to be: white exotic fantasy within the confines of a bed chamber for male pleasure, Ram is photographed as she knows herself to be: her female self and as subject untethered.

NOT YOUR ODALISQUE
for Ram and Her love

“Every now and then I doll up, convince myself to go out, and say, ‘this time I’ll socialize and act normal.’ The moment I get to the party, or an art event, I always sense the discomfort creeping in. I try to brush it off, go and look for friends and acquaintances, and chat with them. Then I start to get too chatty, then I try to stop myself, then I get into a political argument, then I get upset. When I get home I tell myself I had a great time, sans minor ruffling of feathers. I go to bed congratulating myself for being less awkward in a crowded room and actually socializing, but then the next day I find myself tagged in photos that shatter my illusions. I guess I’ll always be awkward.” – Ram

She is on the hunt for beauty –
is it a scavenger hunt?
She searches for Herself in your eyes
as Her blood carries a history of beauty
though She, born otherwise,
traces beauty to old paintings
of French white nudes
versus Her brown grandmothers
sensualized – ready to crumble
in the birth lines of Her hands
where beauty has been recorded
drawing out a titillation
that is all too taboo.

She is on the hunt for beauty –
not so much a predator
but as one eager to catch butterflies in Camiguin
for the rarest, most beautiful one
to understand it, admire it, remember it
so it never leaves.
She is in constant search
wondering
is it in me?

Do you see beauty as She tastes your lips
as She and you lie naked together and
She runs Her fingers down
down, down where ecstasy giggles
with a beaten-down soul?

She wonders if Her beauty
is reflected in shower scenes
where suds swirl and dance
from your skin to Hers.

Is Her beauty too deep to be seen
or does it make its appearance
outside lavish bed chambers
and instead among the tropical palm leaves
as She is loving you?

She has much to say
to question and to fear
where passion seeps
an emotion, a dream:
not who do you think I am
but who do I know I am.

She makes Her exit
like a fly on the wall
so no one, not even you, watches.