To his own people—my people, our people—my Lolo was seen as a threat at the age of 28 as he stood up to the Japanese and possibly even the Americans. He loved his country, even when his country’s men did not love him back. He roars his memory to me today. He would’ve been 105 today.

A poem about my Lolo’s badass self that I read at a Babaylan panel so many years ago in front of a hushed San Francisco crowd can be found here. Since then, I’ve received my own fair share of threats of violence as well as received the deeply insulting minimization of those threats when I stood up for myself over a month ago. It was an oddly similar situation that my own Lolo faced, where there were those who would rather defend their deep-seated colonial mindset, threaten me with violence for speaking truth, and accuse me of canceling when I, and a Pinay collective, demanded accountability from a person who took advantage of me and my literary art as this particular individual never once clarified that he wasn’t who he presented as, not just to me, but to other Pinay sisters and members of my community.

I can say I fully understand what my Lolo must’ve felt as he faced his own detractors among our own people, who not only threatened him with violence after he stood up for what he believed in, but they carried their threats to ultimate fruition resulting in his untimely death when he was just 28 years old. Though I carry a horrific historical reality in my bones of what our own people did to their own, I am also not surprised. How his detractors must’ve felt when July 4, 1946 arrived with no US annexation and a shoddy grant of Philippine independence.

Happy Birthday, Lolo. You are forever the bravest badass I know.

Also, I wanted to honor other Ilocano revolutionaries you should know: Diego and Gabriela Silang who revolted against Spanish rule in 1763; Josefa Llanes Escoda who resisted the Japanese occupation in 1945. Read about them. It must be noted that Diego Silang was also murdered by one of his friends, employed by colonizing authorities to do so. 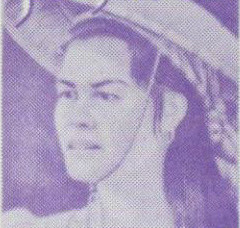 ABOUT THE ART PAIRING

In choosing this particular sunset painting by Ilocano artist Khervin John Gallandez to pair with this post, three things spring to mind.

First, this beautiful quote from the artist, Khervin John Gallandez, himself:

Every time you look at the sea, you spend a good deal of time looking at the horizon, a thick impenetrable curtain, a line extending between two places, earth and sky. Horizons still stand as a symbol of dreams, adventures, wholeness and self-acceptance.

Second, a fellow visual artist Abe Orobia writes on Gallandez’s paintings that are currently being featured at Art Anton Gallery in Manila under his first solo exhibit, “Between Horizons” from June 18, 2021 to July 5, 2021:

The way we look on our horizons might be at a different perspective but Gallandez’s works give us hope that all shall come to pass.

Third, this excerpt from an essay I’ve been working on about my Lolo for the past fifteen years.  I hope one understands the reason why I chose the painting of Khervin John Gallandez, a fellow Ilocano artist, to pair with this particular post about my Lolo on his birthday. While the Pangil Rock Formations are located in the Ilocano province of Ilocos Norte and not La Union, the Ilocano sunset that Khervin captures is reminiscent of another Ilocano sunset that I experienced in San Fernando, La Union, that was deeply moving for me and that I have never forgotten as noted below in my excerpt.

Josh and I decided to take a stroll through the streets of San Fernando. Before we hit the main road of Quezon Avenue, we made our way through a maze of the barangay’s alleys with people staring at us along the way, particularly at Josh whose white skin attracted attention everywhere.

Left, right, left, we passed pool halls, an elementary school, a high school, several sari-saris selling beer, cigarettes, coke, and candy, turned another left, right, left, and then straight, where we emerged out of the maze onto Quezon Avenue with a pizza parlor on our right and the street lined with honking jeepneys.

As we dodged potholes and broken sidewalks, we passed a few random businesses selling shoes, shirts, and perfume, and then took a detour, turning right, where we found hundreds of pristine white stone steps leading up, up, up, somewhere. We had stumbled upon Heroes’ Hill where at the base of the staircase, a family of squatters had set up makeshift homes in the park.

We climbed the long staircase lined with statues of Philippine national heroes and presidents. We occasionally stopped to look behind us, enjoying the spectacular sunset that blanketed all of La Union.

When we reached the top, I could see how far the beaches stretched in La Union. I longed to feel sad. But I couldn’t. I wanted to feel like a grieving granddaughter, but how could you grieve for someone you never knew? I didn’t know anything about Dominador’s childhood, what his favorite dish was, how his voice sounded when he sang, what songs he played on his violin. I wanted to know these things, feel these things as if I had lived them. I would always know things about him. But I would never know him.

As I gazed from my left to my right, from south to north of the South China Sea, I knew my eyes brushed my Lolo’s execution site, as if all the beaches from Bacnotan to San Fernando belonged to him.

Dominador’s name means “to want to be loved.” How much I tried, so he might know how much he truly was.

My review of @veronica_montes’ chapbook, “The Conquered Sits at the Bus Stop, Waiting,” is now live on the @bridgeeightpress site! http://www.bridgeeight.com/review-the-conquered-sits-at-the-bus-stop-waiting-by-veronica-montes/
Pinay creators in da houz! 👊🏽 Me and the founder of @ubebe.beads. Yay! 🥰🥰 Thank you for meeting up with me, Irine! Can’t wait to hang out again!
Image 1: Hiking on Husband’s birthday. 🎉🥳🎉
Image 1: Husband and I celebrating our birthdays.